Perfumes of old Palimpsests & Thinking in Layers: A Response to the Wake

“…the notion of a permanent object with well defined properties can no longer be taken as basic in physics … Rather, it is necessary to begin with the event as a basic concept, and later to arrive at the object as a continuing structure of related and ordered events.” David Bohm – rheomode.

“When the physical sound distinguished as such only by pitch and intensity and quality, is formed into a word, it becomes an expression of the finest intellectual and emotional distinctions. What it immediately is, is thrust into the background by what it accomplishes with its mediation, by what it ‘means’”. But has it not always been the business of the poet to retard this process by which language effaces itself, that is, to deflect meaning in order to keep language resonating in the foreground”. Gerald Bruns. 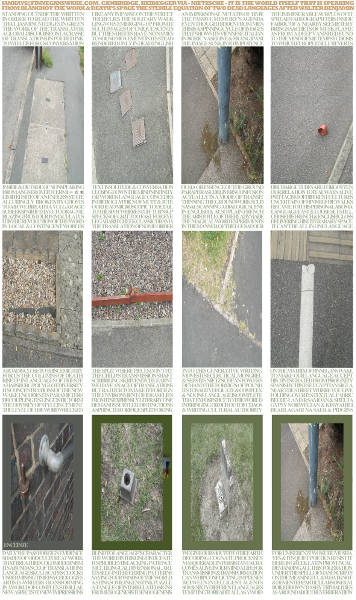 Visual Art and the Humanities in general have become impoverished – and yet to its own benefit it has become its own palimpsest many times over. Finnegans Wake has defined some of the prospects or a vista that lie in wait, as it were, in historical traces – of perfumes and scents from hundreds of volumes whose traces can be observed inside it. It is a commonplace in the study of history as such that a synthesis of histories – of cultural histories – are essentially written to contour uncomplicated details of the lived history that created it. This condensation allows an idea to materialise by cutting and flattening-out a period or periods that can be understood as a simple and yet also complex series of handy concepts: for instance, the Middle Ages, Renaissance, the Enlightenment, Modernism, and so forth. Typically Ideas developed from these condensed ‘wholes’ are what become a manageable force that retains something of an original form but that is basically exaggerated as mystified phenomena whose past is always changing to developing minds. Rather than being trivial the language of the Wake is riddled with likenesses to those whirling metaphoric changes of common expressions that inhabit our in-built linguistic exchanges that we use as pure commonplace remarks – perhaps, say, in easy conversation from day to day, and, as Heidegger puts it, “We are never free of moods…. a state-of-mind always has its understanding … understanding always has its mood” (Heidegger. Being and Time. p.128). Change is the primary manner in which moods or the spectrum of moods is revealed to us. What this constant movement signifies is that moods are always already there, operative – in one form or another – in structuring our encounter with the world, yet the silence they betray is largely unavailable to our reflection.

“Silence” pervades unless the mood is sufficiently saturating as a force that opens itself to consciousness like the sounds in our mind – its musicking and its language, imaging and insights into our own Being. To return to the ordinary with a transformed way of seeing and thinking is the play at work in Finnegans Wake since, as Joyce himself puts the case:

It is my idea of the significance of trivial things that I want to give the two or three unfortunate wretches who may eventually read me. (JJ) (Don Gifford, Joyce Annotated: Notes for Dubliners and A Portrait of the Artist as a Young Man (California UP 1982), Introduction, p.3.)

Michael Eldred writes of the “parallel way to language” of music: or “to put language as language into words”. (Michael Eldred. Thinking of Music. p.12). And of course there are multiplicities of perspectives from where to open-out a discourse on the sensations of meaning and physiologically enhanced and perceived vibrations of music and language in the Wake whose force on the intellect is resonance; yet still it is unsatisfyingly differentiated from beginnings to ends. It just does seem palpably closer to sense music as a problem in the Wake if only we can exaggerate the references in the book itself to musical allusion and having rehearsed this reading and ‘hearing’ in its secondary literature. Finnegans Wake explores itself in tandem with its privileged interpreters of a media-driven age such as ours. Being involved in the creation of works of art and literature literally upon the world-wide-web and as-it-happens has its own way of functioning as a technique that can take ‘control’ of any art-scene it has encountered beforehand, and it is this that parallels the creative mal-practice of Joyce’s endless vocabulary. Finnegans Wake is a forerunner or prelude to what can be taken as a kind of fashion whose work is language first as was the case in the work, for example, of the inimitable John Cage, whose writings on music and living generously outstrip his musical compositions as such and as music. The geomorphology of the Wake as music follows from Joyce’s excursions into a play of palimpsestic densities whose sound-world is brimming with the tiniest of effects illustrative in quality as “a new level of Joyce’s tinkering exactitude”. (Finn Fordham. Lots of Fun at Finnegans Wake. p.80). The palimpsest is the becoming of Joyce’s development of density and obscurity withholding the text enthral to mental musical experience before it evaporates or sings.

One’s lifework asks to be accrued inside the possibilities of the world-wide -web even as we perhaps become the web’s automata: the www is after all a site that also has its limitations and particularities that frame what it is that we are doing outside and inside it. Various writers have suggested that Joyce inferred the possibility of the Internet in writing the Wake. That it is the book awaiting the arrival of the world-wide-web and even for which it was invented. So few websites on the work of the Wake, however, reveal the powerful potential revelation we might discover from the Wake’s ultra-sensitive transformations of language. Given its linguistic plasticity my own imagery and writing as a practice-in-progress has developed through a 15-year reading of Joyce’s texts, and responses to its secondary literature as a means of providing a kind of answer to the issue of language in the art of our time that actually has never been autonomous but has largely – in the present as well as at the opening out of Modernism – never been free of language’s effects. The visual arts belong to language no less than does literature and poetry to which must be added the work of philosophy because it has as it’s most profound source that art is a play of “deflecting meaning” and keeping sensation indefinitely resonating. At the heart of all of this is indecision that has the means of keeping the work alive in a philosophical understanding of the processes of interpretation that have been critiqued as metaphysics: and to elaborate on this in order to think beyond the philosophical equation of mind and consciousness is to look to consciousness’s own decentering. Sources for this concept can be found in the works, for example, of Nietzsche and Freud but likewise Heidegger in his emphasis on the ideas of “lingering” or “dwelling” that takes time – the rhythms of taking “care” (Sorge) as Dasein – being there, and the places of our concerns. The question of how rigorous interpretation can be rests behind the kind of world that we live in today in the ordinary sense of what is generally described as its “speed” and of passing-on “information” (the term “information” itself being open to boundless interpretation). The play of the theoretical – of theory as the work – like translation in the work of translation – are fields of writing in writing that are indeed works of art no less than the most complex aesthetic philosophies for plastic works of art.

Language is the most primitive phenomenon in our lives. The Wake calls on Earth Letters from a “pit” – a “tip” to announce its concerns – and language is the source of all that belongs to WorldMan. Inside language as a type of philosophical reasoning for Being and being the Wake reveals as mangled art’s unreasoned voice the strong sense that language is the most universal phenomenon of all. No form of explanation will cope with its dimensions. Language is chaos but Interior Monologue and stream of consciousness – the smoky candlelight of subjective experience – allows imagination access to anarchies of cross-tonged debate and dialogue or dialogism that is the space of, for one, Mikhail Bakhtin. Joyce and Duchamp had sought to develop an ever finer-grained representation of the form and flow of mental activities as they unfold in time, and, in a strong sense, their writings transform our cognitive abilities to think along the lines of philological enquiry. It was Joyce’s plan to create humanity through the Wake as constantly reenacting the basic patterns of behaviour that apply to all men and women in all ages.