Given The Illuminating Gas The Waterfall

Maurice Blanchot: The Writing of the Disaster 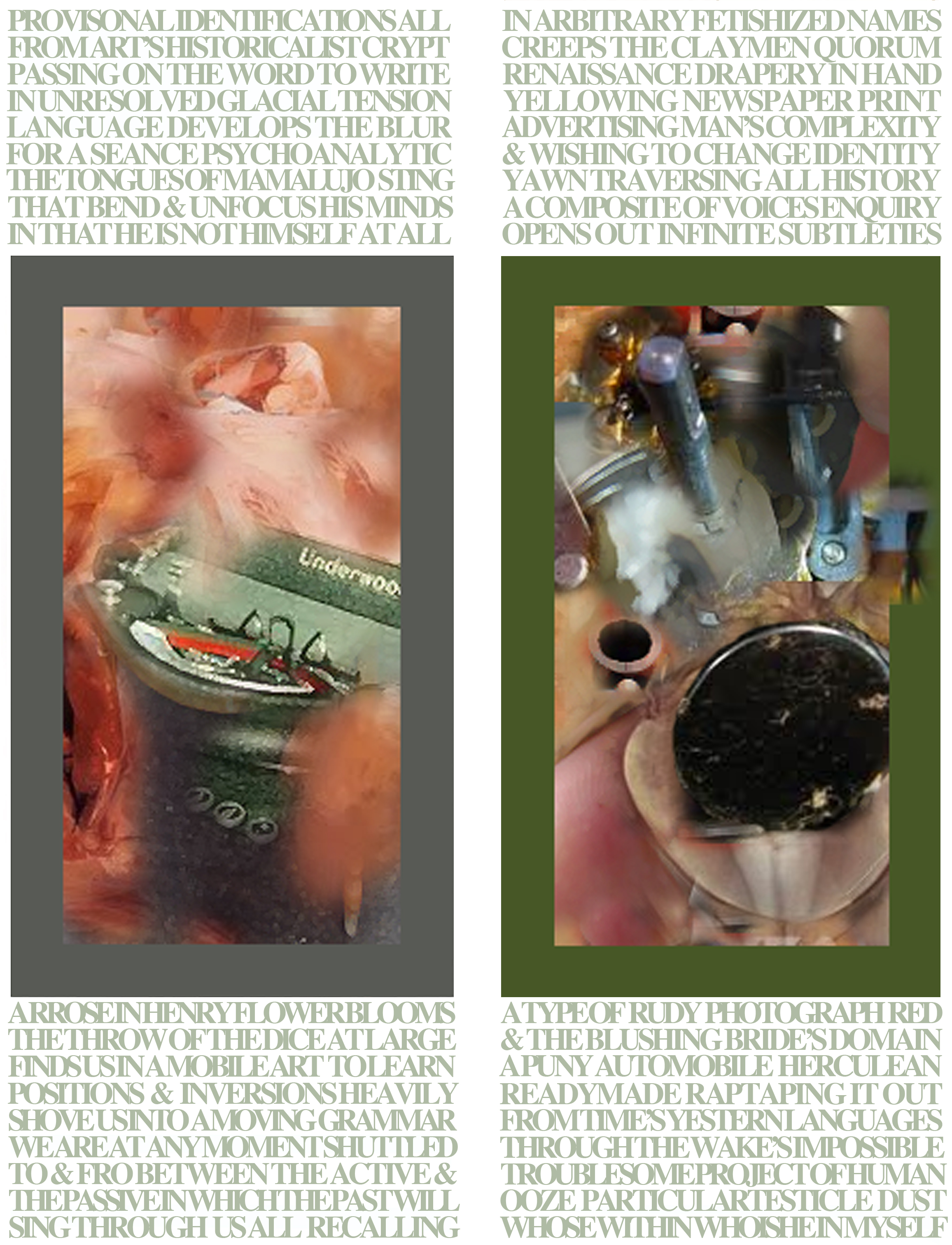 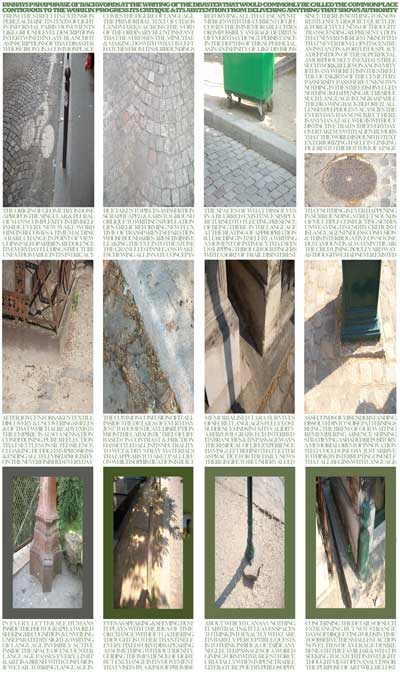 Walter Pater. Deconstruction. The Artwork as Supplement to Language

If there is to be a strong art in the future then it would have to be a literary and an intellectually creative activity built as a powerful extension to “ordinary” perception. The world becomes, in this sense, an aesthetic phenomenon in perception and the apparition of time itself – an indivisible machination. Such would be the split in a more refined thinking between the concept of the Readymade and the Large Glass for instance: between channels that mix quandaries happening to the particular and the general. Such became the history of ideas we recognize in Duchamp whose valueless items were beyond value and posited as such. Duchampiana are always Double-sided as indeed are the figures that appear and disappear in Finnegans Wake. One understands this creative phenomenon when one also understands what Duchamp calls the “infrathin” experience, and when one lends oneself to it in daily life during what Joyce calls the “epiphanic moment”. The “snapshot effect” mentioned in Duchamp’s notes applies to the verification of a world that is seen at least twice: once as a state in empirical fact and once as an internally arranged consciousness such that the more informed this internal consciousness has become the further the state of consciousness dwells on the world of its own making: the play of Pataphysics though apropos requires the sense of the everyday here that hitherto has probably eluded many writings otherwise applying to the works of those who have employed the Jarryesque idea of reference.

Those artists whose lives are defined to a large extent by the history of ideas and its metamorphosis – that is to say the reconception of adaptations through the force of the history of ideas (a set of new phases within the history of such ideas) find themselves at the vanguard font of Language yet from which there is no escape; hence the desire to blast apart the foibles of ordinary language in order to make oneself free and ultimately stronger. A place apart from what Joyce calls “the rabble” instantaneously provides an effective cave from which Nietzsche’s Zarathustra may walk his vast Cities; such are some of the inviting pleasures that art would bring to that reader.

Sensation embodied in thought and the pace at which our lives are filled by aesthetic impressions establishes further desired frictions in new experiences of refined perceptions: what Walter Pater calls “pulsations”: a “quickened sense of life”, which is to say, a centrality of aesthetic apprehension of works of art but, just as intriguingly, though differently, the flux of daily life. The case becomes impossible if it is laid out this way. Yet drawn as we are to the play of the commonplace rather than the work of art, as it were, still it was initially art that taught us how to see and how to look at what is out there and what might be inside ourselves. From works of art we gather a plenitude of perception leading us on between the opening of fact and fiction: the firmly asserted empirical vision of the external world – but where in empiricism can we find a division between outer and inner? Walter Pater’s solipsism attempts to cover the field of aesthetic being in his attempts to sustain the visual arts inside such a conundrum. Of course such a seeming impasse is a mere illusion since we are here writing about Art and it is clear that most of us have no interest whatsoever in such a working of metaphysical thinking. Taking instruction of a kind from Derrida, the work of art is a supplement to the text it may have engendered or from which it snatches its focusing beam of light – even its optical guide. The work of art is always caught in Language hence the play of what Pater managed to create at bottom as a foundation in a single word: “Sensation”. All of Pater’s writing conglomerates around this word and in quite difficult ways and modes and thus it is easy to perceive his words hovering over a chasm like a string ladder that sways between two vast and dark canyons: an unthinkable fall into Language initially and hanging on to the work of art whose light is made a little less shadowy by the force of strong writing. Art is supplementary to knowledge even in this scenario of Pater’s thought and his grounding of art in “culture”, since how, we need to ask, does “culture” exist at all if not by means of Language. Language teaches from bottom to top and the play of the referent belongs to the history and theory of art as a point of return for metaphysical practices that have brought about the work in the first instance, and returns to the artwork as a series of documents and discussions and of historical practices whose pertinence we accommodate.

Importantly even Pater did not bring himself to this “going under” of the phenomenon of the work of art as a written/spoken manifestation of human skill and endeavour, but rather clutched instead at different foundational aspects of art’s potential for sensation that art enacts for its own sake. But Pater’s view on aesthetic perception and reflexiveness is not an abstraction on a definition of beauty, but rather pursues formulae that most adequately re-create the reflexiveness of perception in previous sensations, and that reveal intellect as a scene of reflexive activity on the re-perception of itself.

Sadly this condition has often been described by the famous saying: ‘art for art’s sake’ that wholly fails to describe anything at all. Pater’s discussion of aesthetic perception in the Conclusion of his work The Renaissance reveals perhaps more than elsewhere in his written studies his grasp on aesthetic perception as an epistemological purpose for the capturing of sensation within a form that allows one to sense the activity itself. From here one sees the consistent flow of internal seduction demonstrated by deconstruction’s force in engaging both with literature and philosophy as self-founding, not as a ‘method’ but rather as a theoretical practice that questions their value.

Turning to the six latest Photoshop works on this page – call it a lineage to the James Joyce Conferences I attended from 2004 through 2010 – show 12 photographs each with texts. The photographs are details from cemeteries taken at each of these particular conference settings, or rather, more often, margins of the surrounding areas outside of each of their cemeteries or in between specific burial plots. This overt reference is of course an allusion to Joyce’s HCE and ∴ in Finnegans Wake’s terms multichoral multimimetica signals of simultaneous times falling in the text, but as a simple reminder, and not a program. The transhistorical code of life and death fills the Wake in general with expansive moods like Walter Pater’s “aesthetic hero”, and we do well to remember that Pater was one of the first to apply psychology to art interpretation: not least that Pater’s and Joyce’s ‘vision’ is the fictional embodiment of the life of heightened awareness and visionary experience.

These works in progress of cemetery “situations” called for an interruption by the machinery of Photoshop as a way of continuing the repercussions of what photography has been and what it has done to original works of art. A moment of opening out the question of what and how the work of art means in our own time can either become a subtle continuation of a thoughtful life or perhaps the droll incertitude of the void called up by traditional fashion. It’s as though the case of fashion is its own Alpha and Omega in syncopation with its ever-increasing technological resources. Fashion or fashionaping (FW.505.8) is another term for delusion and human waste that in the case of the West actually demands to be addressed by closer writing on the power of the humanities to create far richer horizons within human understanding. But the humanities are dwindling in universities all over the world bringing about the general catastrophe of which Maurice Blanchot writes in The Writing of the Disaster:

The disaster ruins everything, all the while leaving everything intact. It does not touch anyone in particular; “I” am not threatened by it, but spared, left aside. It is in this way that I am threatened; it is in this way that the disaster threatens in me that which is exterior to me – an other than I who passively become other. There is no reaching the disaster. Out of reach is he whom it threatens, whether from afar or close up, it is impossible to say: the infiniteness of the threat has in some way broken the limit. We are on the edge of disaster without being able to situate it in the future – that which is yet to come – if the disaster were not that which does not come, that which has put a stop to every arrival. To think the disaster (if this is possible, and it is not possible inasmuch as we suspect that the disaster is thought) is to have no longer any future in which to think it. The disaster is separate; that which is most separate.

The “disaster” for Blanchot is “imminence” that rather spells out for me the metaphor of the cemetery and its places of mood around which Pater, for one, has written in Plato and Platonism. “Tis the dead things that are after all the most entirely at rest”, and consistently associates immobility with death. In his Conclusion to The Renaissance it is the rigidity of death that urges us to a mobile receptivity. “Failure is to form habits; for habit is relative to a stereotyped world”. These cemetery-works attempt a poetic of Image/Language to debate something of the spell of HCE’s disappearance. 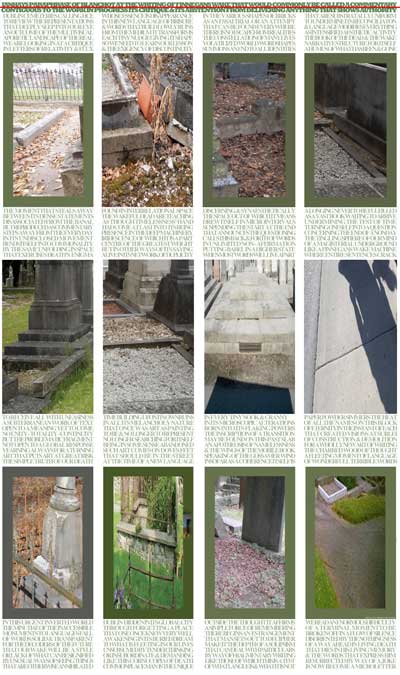 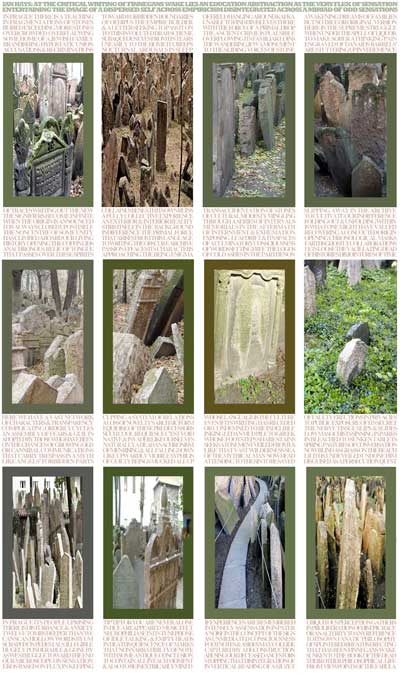 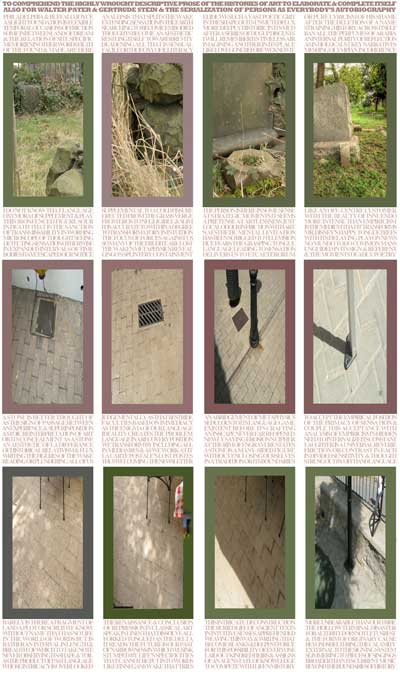 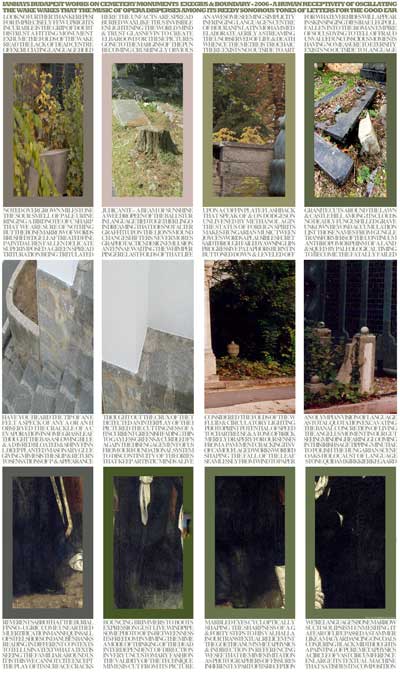 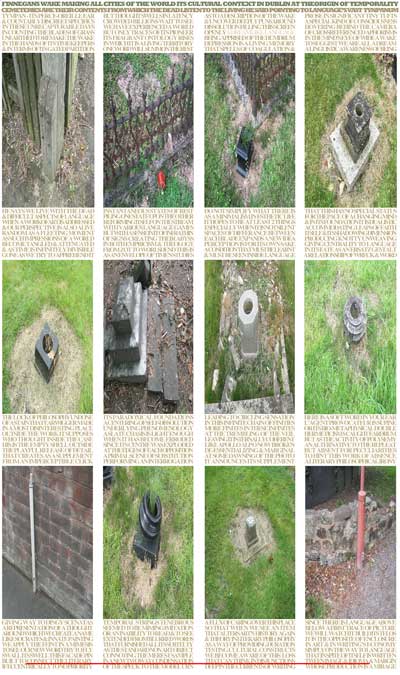